This page describes a train trip along the Old Kiln Light Railway to Mills Wood station from Reeds Road.

‘Reeds Road’ station is the railways main station. This station constructed in 2003 replaced an earlier sleeper built platform on a different alignment. The new layout amongst the trees is a far more open arrangement that allows locomotives to run-round trains and facilities for offloading visiting engines.

The passenger facilities comprise the waiting room with a welcoming coal stove in winter, providing a well-needed shelter from the prevailing wind that can whip across the fields to the west of here. Often this is the first experience of the railway environment that a waiting passenger for the Santa trains will see.

In early spring, the plethora of bulbs around here is a delight.

To the far end of the platform, a water tower is the main water supply along the line for thirsty steam engines.

Immediately on leaving ‘Reeds Road’, the line curves to the right and climbing on a steady 1 in 130 gradient; the line ambles alongside the boundary of the museum, with glimpses of views across the adjacent fields and museum display area.

Passing the windpump, the train approaches ‘ Waterhouse’s level crossing’, slowing to check that explorers crossing the line to visit the nearby RSPB reserve are clear. Beyond the crossing, there is a small hut for use by the crossing keeper. This hut replaced a larger hut that was moved in 2006 from here for use further up the line as it severely impaired the visibility of the crossing. Trees overhang this part of the line to form an almost tunnel-like effect.

Soon the site of an earlier water tower appears on the right. The remnants of the sleeper built base, and a water tap is now all that remains. Steam trains used to stop here on uphill journeys to top up their tanks. The start away from here was sometimes difficult, especially if the rails were wet as the gradient also steepens to 1 in 50 at this point. So the repositioning of the locomotive watering facilities to Reeds Road in 2014 was a blessed relief to all steam train drivers.

Conifer trees brush against the left of the train, and museum buildings encroach to the right. This section of line is known as the ‘Village tramway’!

A short curve to the left sees the gradient easing to around 1 in 200 and the scenery opening out once more. The train clatters over the points announcing the arrival at the operational headquarters of the line. To the left is the railways’ works yard where there are the sheds, workshops and sidings, often busy with staff beavering away on the latest project in hand. This is the railway’s nerve centre. The train enters a platform on the right-hand side of the line, where a former bus shelter from the Astolat of Peasmarsh company forms a shelter for waiting passengers. A sign inside across the back of the shelter proclaims that this is ‘Old Kiln Halt’. Once this was the main station on the line, passenger trains now only operate from here on quiet Sundays throughout the summer. There is a permanent way yard behind the platform, often filled with miscellaneous items of rolling stock and engineering materials. These sidings are officially called ‘Jubilee Sidings’ as they came into existence in our 25th year; however, our regular members have nicknamed this area ‘Trumpton Yard’!

The line, still climbing, now swings to the right behind the ‘Old Schoolhouse’. The last of the storage sidings is to the left with its collection of oddments of the rolling stock ending in a substantial buffer stop. The ¼ milepost is passed in the bank to the left. The gradient steepens once more to 1 in 50 for a final pull up to the ‘Oatlands’ station; this stretch of the line is colloquially known as Dogger Bank! Trains have been known to slip to a halt on this section as trees overhang, and the rail can become very greasy. Much of the light section rail of the original First World War tramway track that served the adjacent forestry land has now been reused as fence posts along the line side.

Passing around the back of the museum’s display sheds and cricket pavilion, the line passes the children’s playground and enters the platform of the ‘Oatlands’ station. At Christmas time, it is transformed into ‘Santa’s Halt’. Here there is another small waiting room, again with its own coal-fired stove.

There is a short but very steep section up to a little-used level crossing, pulling away from Oatlands. Here the gradient eases to 1 in 45, maintaining this grade for the rest of the journey. The view to the left of the line has been recently opened up from dense woodland into open heathland.

Passing behind the museums stores, a yellow sign with a black tree symbol indicates to steam engine drivers that there is a fire risk beyond here as we approach a more wooded section of the line.

The line curves to the right on a 100-foot radius curve as the ground rises around us and we are in a wooded cutting. The line twists and turns through here, almost intertwining with the tree roots. The view to the right glimpsed above the cutting sides reveals just how high the line has climbed since leaving the works yard that can be seen in the distance. This is the scenic part of the line, and a woodland trail can be followed, allowing the visitor to see locomotives working hard up this section. Above us and to our left is the heath and woodland area belonging to the RSPB. 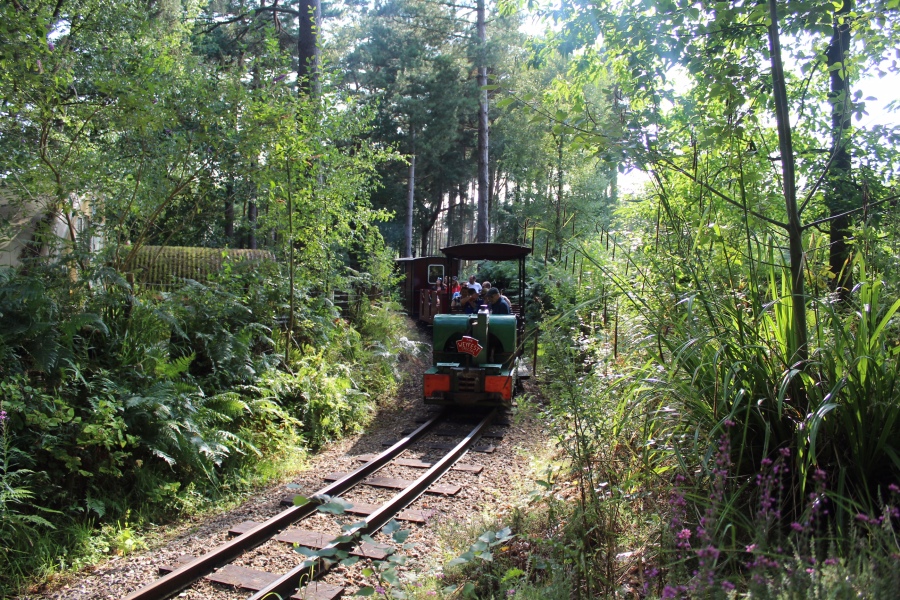 Soon the cutting sides fall away, the climb of 1 in 45 is over, and the line levels off as the train bursts out into the open. A branch line serving the timber yard climbs steeply up and swings in from the right to run parallel with us for the last few yards, through a park-style gate and into the station area. On certain days through the summer, a train of timber may be seen struggling up from the timber yard and into the loop opposite the main platform. Our train slows through the paintwork, and we shortly come to a halt at the platform. The station name board proudly informs us that we are at ‘Mills Wood’, the end of the line. The train has climbed a height of 22 feet from leaving the ‘Reeds Road’ station. 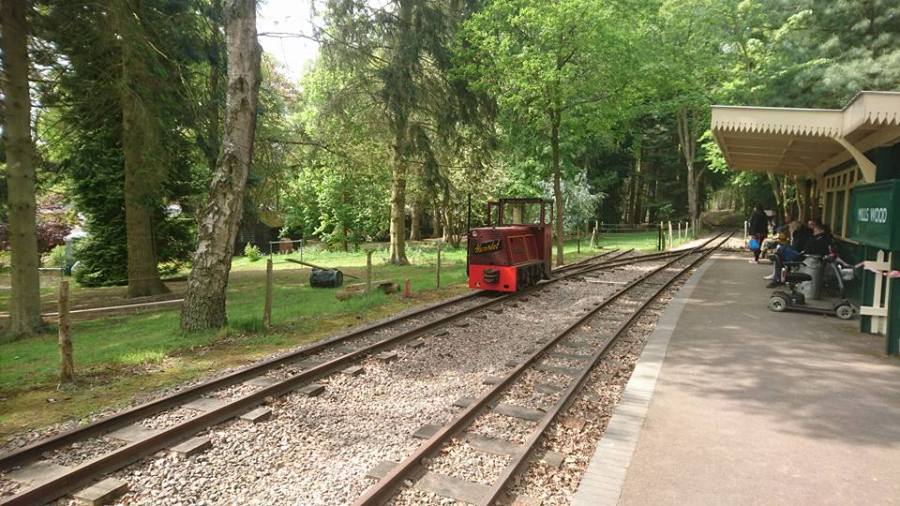 The station building at Mills Wood has the body of a former Horndean and Portsmouth horse-drawn tram that is being entombed into a purpose-made shelter complete with an impressive canopy. This station is becoming increasingly important as the main station for museum event days throughout the summer months.

Beyond here, the line crosses a woodland track over a substantial level crossing, passing the ½ milepost on the left and ending abruptly in a shallow cutting. This section is purely for locomotives running around their trains and the occasional storage of rolling stock. 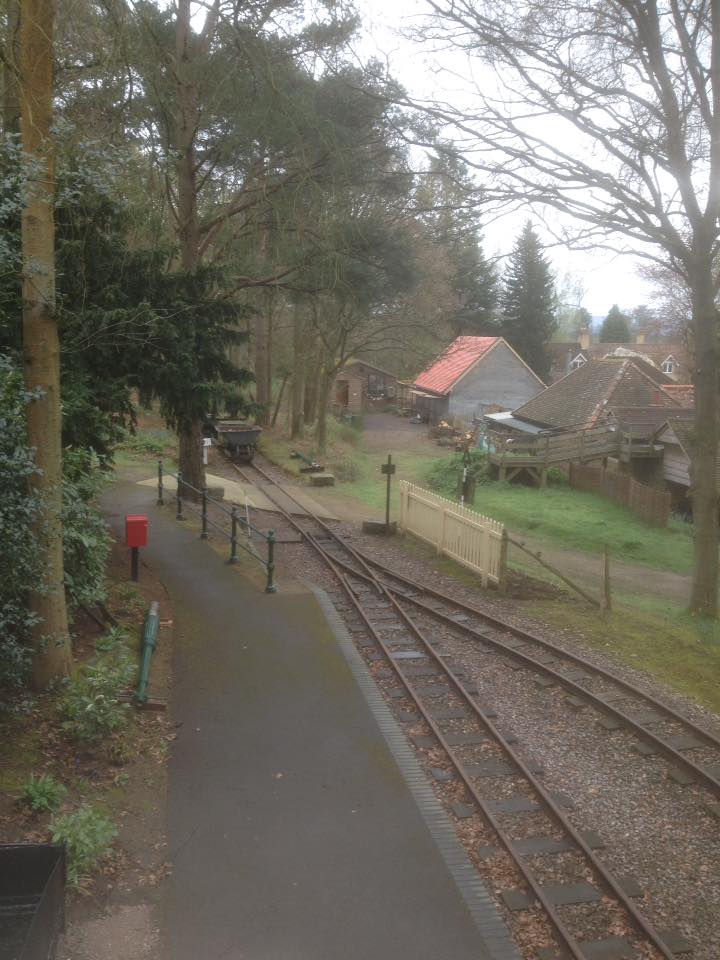 The environs of ‘Mills Wood’ station are charming with the sloping lawn leading down to the large Oak tree and the museum café. Adjacent to the station is an ironstone furnace that is occasionally lit that has water powered driven bellows. Also, here is the museums forge, where a blacksmith can often be seen demonstrating his skills. This is an ideal location for a picnic and for exploring the woodland trails.