On Loan From the Moors Valley Railway 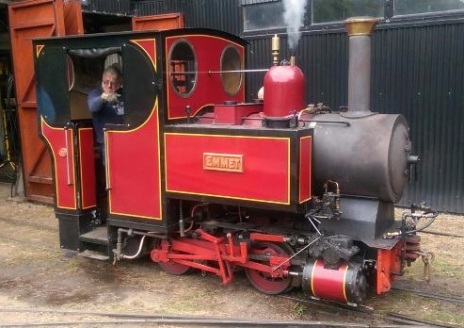 The loco’s frames and wheels come from an 0-4-0 diesel locomotive, constructed by Ornstein & Koppel in 1937 and used at the Rocket (V1 & V2 ) testing facility at Peenemünde.

“Emmet” is named after the Moors Valley Railway Cat.

Built in 1922 by Orenstein & Koppel of Berlin. Works No. 9998. Supplied new to Servicios Florestais, Portugal  (Portuguese forestry commission) via an O&K agent in Madrid, Spain.

The reason for this being In the First World War, O&K built railway engines and Rolling stock of all sizes for the German government. With the collapse of Imperial Germany in November 1918, the Allies put further restrictions on German manufacturing and military capacity, seizing all army Feldbahn engines as per the terms of the Versailles Treaty that ended the First World war.

The treaty also removed access to export markets; this had such an impact on the company at the end of 1925, work stopped for three months as a result of the lost business (Hence the works plates say Madrid even though she was built in Berlin.).

Little is known about her life in Portugal, she was the first Steam engine delivered to the Portuguese Forestry Commission (National Forest Number One) along with two other sister engines, after many years service she ended up outside a cafe in Cascais as a tourist attraction.

In 1969/70 she was brought over to Britain where, after several changes of ownership, she ended up on the Old Kiln Light Railway in 1986.

Built in 1906 (Works No. 920) by the Hunslet Engine Company of Leeds for the, Penrhyn Slate Quarry in North Wales.

When rail operations ceased in 1962 the locomotive was sold into preservation to a private railway in Leicestershire.

Delivered to Penrhyn on the 17th August 1906, with sister engine Sybil Mary

Withdrawn from work with defective boiler in 1951

Withdrawn 1958 with a defective firebox. Stored out of use pending decision on boiler. (All locos gradually withdrawn from then as quarry turned to road transport)

Railway closed 1962 and and locomotives put up for sale

Sold again October 1966 to John Vernon and moved to Newbold Verdon in Leicestershire. Locomotive had been partly dismantled at this time and was re-assembled by John with a new inner firebox. Steamed again in 1970.

After 10 years loco again put up for sale with complete rail system.